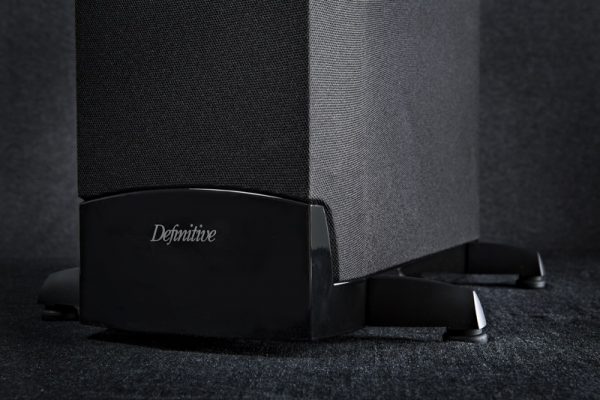 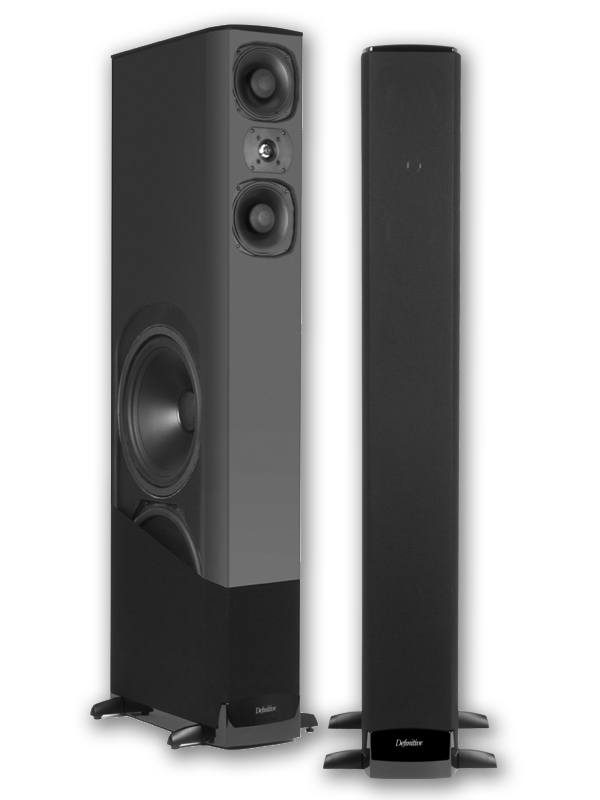 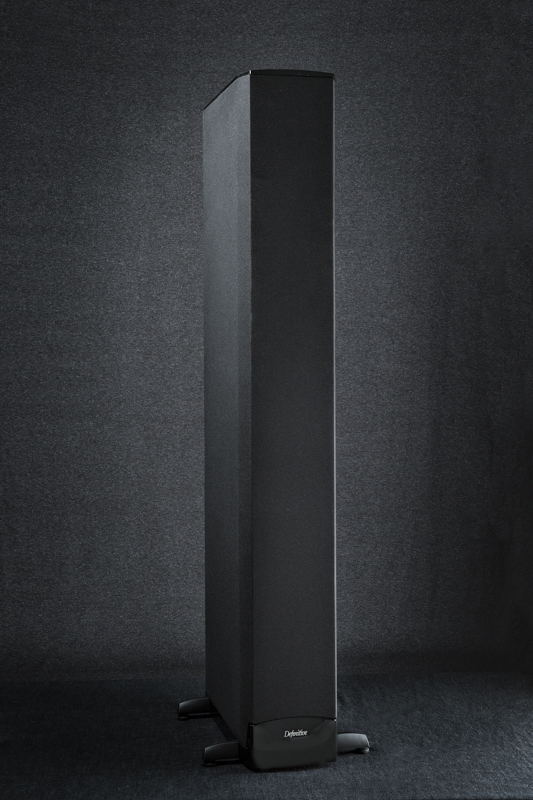 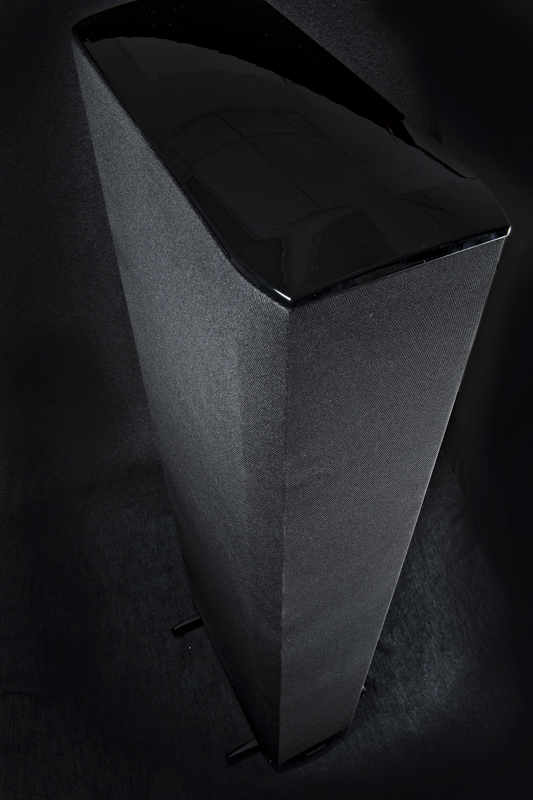 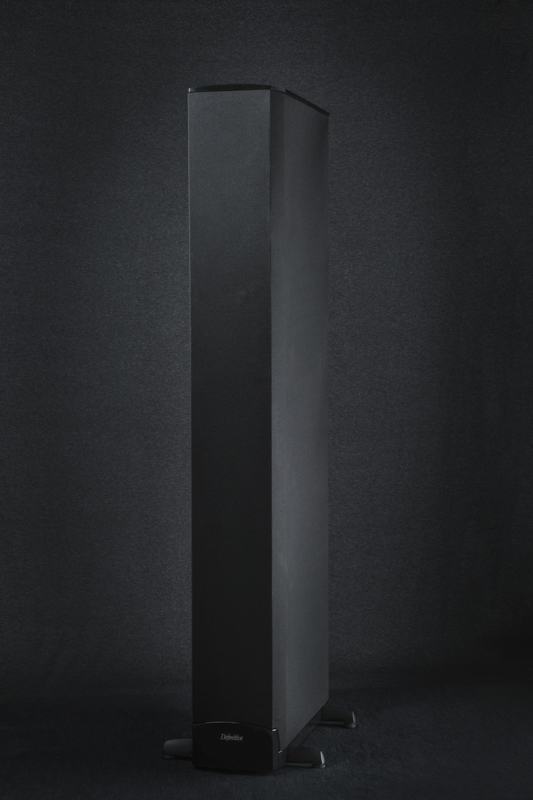 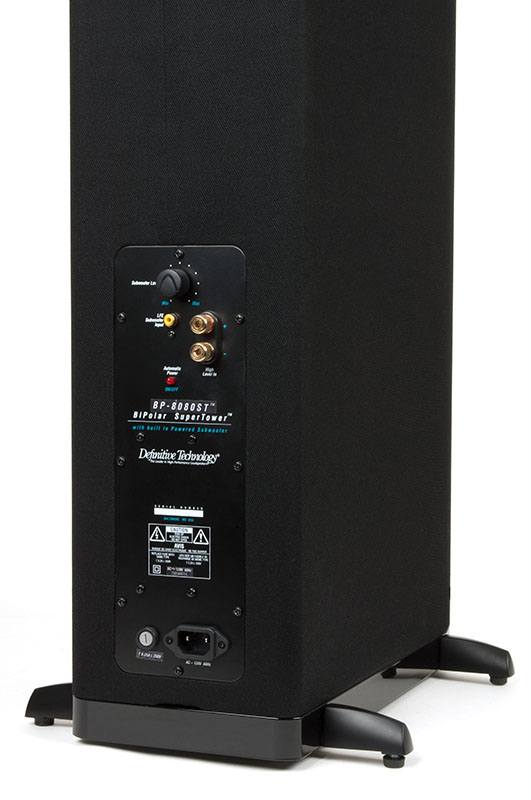 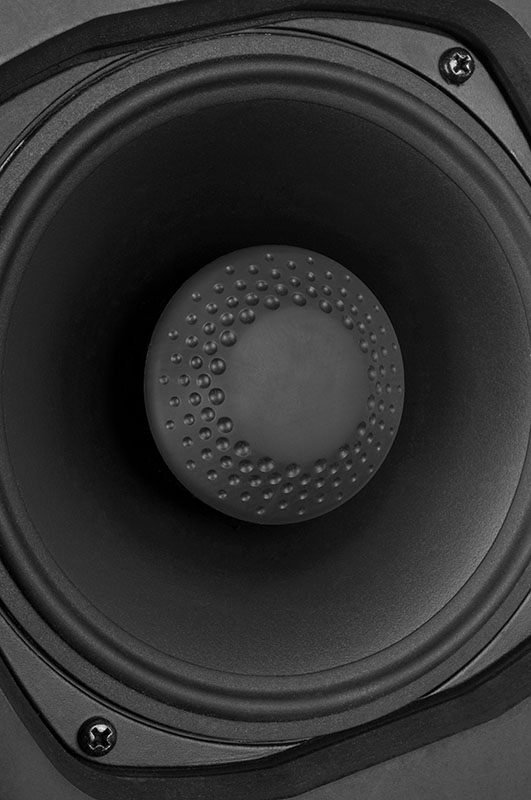 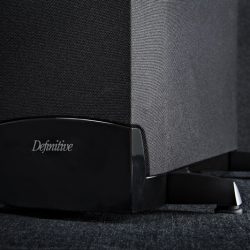 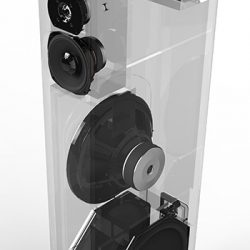 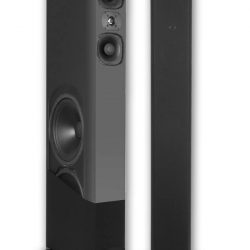 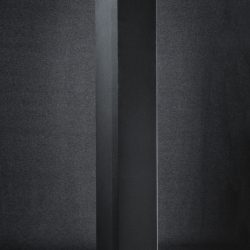 Say hello to the Definitive Technology BP-8080ST or SuperTower loudspeaker. The BP-8080ST is the largest among Definitive’s newly redesigned SuperTower line, measuring in at 48 inches high by seven inches wide and 16 inches deep. While the BP-8080ST may look like the SuperTowers of yore, there are some subtle design changes that prove that the update isn’t just in a name. The BP-8080ST’s are a bi-polar design meaning what fires forward must also fire backwards. The BP-8080ST has two, five and a quarter inch midrange drivers flanking a single, one-inch aluminum dome tweeter in a D’Applito style array in the front and a midrange and tweeter around back. The BP-8080ST also features a 455-Watt powered 12-inch subwoofer with two, 12 and a half inch passive bass radiators giving the BP-8080ST a reported frequency response of 18Hz to 30kHz. The BP-8080ST has a sensitivity of 92dB into a nominal impedance of eight Ohms, making it ideal for virtually any two-channel or home theater receiver/amplifier on the market today.

You can connect the BP-8080ST to you stereo or home theater system in a variety of ways, starting with its robust five-way binding posts, which accept bare wire as well as banana and spade terminated speaker cables. There is also an LFE input if you wish to connect the BP-8080ST’s sub to your AV receiver or processor via an LFE cable and treat the large floorstander more like a subwoofer-satellite speaker combo. Of course you can adjust the BP-8080ST’s internal sub when playing them back full-range using the subwoofer level control, also located on the back of the speaker. Regardless of how you treat the BP-8080ST’s internal subwoofer, you’ll have to power them using the included, detachable power cord, which means you’ll have at least two types of cables, speaker and power, to contend with when placing the BP-8080STs in your room.

The BP-8080ST’s sound is larger than life, capable of filling even the largest of rooms with ease. But don’t think that the BP-8080STs are nothing but brute force, for they aren’t; they too possess a delicacy not often found in loudspeakers costing less than $3,000 a pair. The BP-8080ST’s midrange is sublime and though it possesses a hint of artificial warmth, still manages to sound natural and organic. The BP-8080ST’s bi-polar design makes for an enveloping soundstage, one that is both seductive as well as nicely appointed. The BP-8080ST’s high frequency performance is also quite nice, possessing surprising extension and air. The BP-8080ST’s low-end is insane, managing to be both raucous yet refined when need be. The BP-8080ST can reach the lowest of octaves with ease and thanks to its capable built-in amplifier manages to achieve such feats without sounding bloated or slow.