Why is a high quality projection screen Important?

Often times, people overlook the importance that the projection screen has in the overall picture for their theater. The screen is what reproduces every pixel, colour and last bit of detail from the home theater projector. In short, the screen makes the image from the light emitted from the projector.  If you purchase a Television, would you be happy if the glass on the TV was clear in one area and blurry in another area?  What if the picture on the TV is brighter in the center but very dark in the corners? Would you still be happy with your TV? There are both expensive and cheap screens out there that will give you exactly that, an image that is flawed – so why should you settle for that in a projection setup if you would not settle for it when purchasing a TV?

What are some flaws experienced on screens that are not up to Reference Standards? Do I need a 4K projector screen?

Hot spotting happens when the optical coating on the projection screen is not uniform or does not spread out the light evenly across all angles. This results in the center of the screen being much brighter and shinier than the corners of the screen.  The shininess also accentuates or allows the viewer to see the projection screen material itself as opposed the colours that are supposed to be reproduced by the screen.

In short, the best screens on the market will have a very uniform picture with no hot spotting whatsoever. This guarantees that the colours and brightness are the same everywhere.

Just imagine watching Hockey on a screen with both hot spotting and texturing. This would a terrible experience.

Almost 100% of the screens on the market today will have a textured and pot-marked surface. This is because most projection screen materials are really legacy products from 1940s and 1950s, which were used with overhead projectors and old digital projectors. Up until a few years ago, most projectors had resolutions of less than 1024×768 pixels. This means that on a 100” wide screen, the pixel sizes were far larger than the texturing size on the material, and the interference with the image detail or sharpness was not large. In other words, the projector was the bottleneck, not the screen material. However, the situation today is quite the opposite. 4K is becoming more and more prevalent. This means that pixel sizes are now in the 1mm by 1mm to 0.5mm to 0.5mm range. You can imagine what happens to those pixels as they are reproduced on a projection screen that is grainy and pot-marked compared to a 4K projection screen. Every pixel is not reproduced as a perfect square causing loss of resolution, and sharpness.

Below is a close up of materials from some different screen manufacturers compared to EluneVision Reference 4K screens:

You can see that smooth and high end materials like the EluneVision Reference 4K material and Stewart’s material does not have any texture.

This is what happens when you project an 1080p image onto these materials (testing done with Epson 5030UB Home Theater Projector):

You can see that Reference 4K material and Stewart Material keep every pixel geometry accurate whereas the other materials are distorting the pixel structure. Here is the end result: 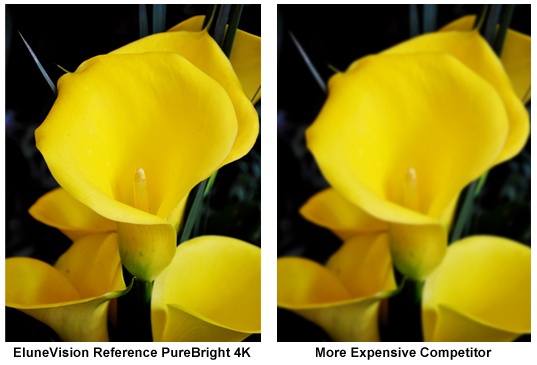 The above shows that the question of “Do I need a 4K projector screen?” is quite clear. Not only does a 4K screen greatly help with 1080p images, but it also helps greatly with 4K images even more so. You can see that Reference 4K material and Stewart Material keep every pixel geometry accurate whereas the other materials are distorting the pixel structure. Here is the end result:

Distortion due Lack of Image Flatness 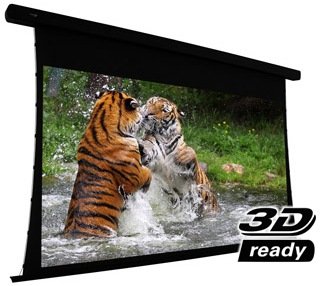 What screen material is right for me?

This question seems to be a very complicated one as there are so many different materials out there. However, based on our experience over 8 years, we can simplify this for you to make it easy.  We can say from experience and certainly that 95% to 98% of our customers are doing projection theaters in their basements. This is just a ratio that we get that by talking to our customers on a daily basis. From this we can then conclude some basic principles/observations:

If you fall into this category, then my answer to what type of screen material is very, very simple. Go with a 1.0 gain material that is neutral and white, with no hot spotting, perfect colour uniformity, and no texturing. You cannot get a better screen despite all the marketing and hype surround super expensive screens in the $3000-5000 category that claim they will give you enhanced contrast, etc. Those screens will give you better black levels but at the loss of colour uniformity, and give you hot spotting and texturing. Our recommended screen for projects, and DIY customers is the EluneVIsion Reference Studio 4K 100 Projection Screen with the Reference 4K 100 1.0 Gain Material. At the price level of the EluneVision Reference 4K screen, there are no competitors that deliver the same performance. To get a screen that is as good as the EluneVision Reference 4K screens, you have to go to the price level of Stewart Screens that are two to three times the price.

Home theater projectors are also bright enough now that you really can have all the lights on in the sitting area and still get a really bright image on the Reference 4K 100 screen and not worry about having a washed out image. You should not be getting a high gain screen unless your plan is to always blast your lights while watching projection material, or if you have a lot of completely uncovered windows in the room – this is a misconception.

What type of projection screen is right for me?

When choosing the projection screen, the first thing you have to determine is which screen is right for me – fixed-frame or motorized?

If your room necessitates that you have something behind the screen (whether a small TV, a painting, or something similar) or if the wall has a fixed object like a fireplace, your choice has been made for you, as you have to go with a motorized projection screen.

If you have a simple wall with no objects or obstructions, the decision is a personal one. The benefits of motorized screens are that they can be hidden away when they are not in use. You may want to do this because you have children that may not be able to resist playing with or damaging the screen, or simply because you and/or your significant other would like the screen to be retracted back in the housing when not in use.

The benefits of fixed-frame projection screens are that there is not much that can go wrong with them after they have been installed. There are no moving parts, there are no rollers and motors, which essentially means nothing can break. Also, many people have told us they love the sleek look that a fixed-frame screen gives. With the plush velvet frames, it looks like a giant plasma TV. 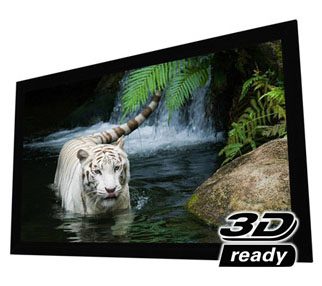 Tab-Tensioned motorized screens are highly recommended, as they will dramatically extend the life of your screen, and give you better performance throughout the years that you use it. Unlike a fixed-frame screen, a standard motorized screen is only tensioned vertically by gravity. Because the screen is not tensioned vertically, it is inevitable that waves develop in the material.

What Projection Screen Size Should I Get?

The screen size depends how far you are from the screen, so the first thing you should ideally figure out is the location of the seating, and more importantly, how far your eyes will be from the screen. Based on our experience in demoing screens to literally thousands of customers at our Hamilton, Ontario showrooms in the last 8 years and customer feedback, as well as extensive experience installing home theaters, we would recommend the below chart as a good guideline. No math involved, just an excellent image for your sitting distance:

As you can obviously see, these are not pinpoint recommendations, due to the fact that at the end of the day, people do have personal preferences. Generally, we tell people to choose the screen size for which your chosen seating distance is closest to the middle of the range. For example, if you are sitting 10 feet away, the chart above shows you can go with either the 92” screen, or the 100” screen, but since you 10 feet is right in between the 92” 9-12 feet range, we would generally recommend going with a 92” screen.